Above photo: "The Beverly Hills Hotel."

​CELEBRITY HOMES AND HAUNTS
The book provides a self-guided tour of celebrity homes in the so-called Platinum triangle: Beverly Hills, Bel-Air and Holmby Hills, complete with not one, but six separate star maps, of the area. Unlike the maps hawked all over Los Angeles, the star maps in the book are kept up to date and even include detailed driving directions. Mr. Gordon also removed all the distracting side streets where obscure or long-forgotten celebrities have lived.

With the aid of the book, visitors can create their own tours and sightsee at their leisure. Even if you do not have access to a car, and intend to take one of the many "Tours to the Stars' Homes," the book will make your sightseeing experience more enjoyable. That is because the book provides not only photographs of, but histories and anecdotes about the more famous homes.

For example, you will learn that:
Visitors who hope to catch glimpses of the stars will not see them outside their gated estates, but they can go to the many nightclubs and hotels that cater to a celebrity clientele. The Beverly Hills Hotel is probably the best known, but there are several others, including the Four Seasons, which the studios constantly use for press junkets.
MOVIE AND TV LOCATIONS
Locations from the following motion pictures can also be found in the book:
Visitors can also find the "L.A. Law" building, the "Melrose Place" and "Seinfeld" apartments, the "Baywatch" lifeguard station; the "Bat Cave"; and homes featured in shows like"Desperate Housewives," "The Adventures of Ozzie and Harriet," "Benson," "The Beverly Hillbillies," "Beverly Hills 90210,"  "The Brady Bunch," "Doogie Howser, M.D.,"  "Dynasty," "Happy Days," "Knight Rider," " "Malcolm in the Middle," "30something," and "The Wonder Years."

Recurring locations featured in "The Adventures of Superman," "Alias," "The Big Bang Theory," "Brothers and Sisters," "Cagney and Lacey," "Fantasy Island,"  "How to Get Away with Murder,"  "MacGyver," "The Mentalist," "Moonlighting," ""Numbers," "Parks and Recreations,"  "Remington Steele,"   "The Rockford Files," "Scandal," "7th Heaven," "Supergirl," and "Thirtysomething." ​
NOTORIOUS HOLLYWOOD SCANDALS, MURDERS AND SUICIDES ​ 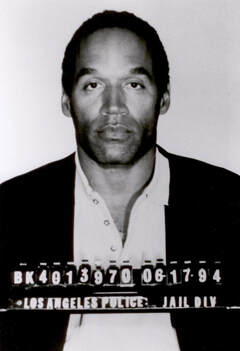 There are also entries for the cemeteries to the stars, including Westwood Memorial Cemetery, where every year thousands still make a pilgrimage to Marilyn Monroe's crypt. Hugh Hefner, who bought the adjacent crypt for an estimated $125,000, keeps her company. Hefner never met Monroe, but she was his first centerfold.

And then there's Hollywood Forever Cemetery, the only cemetery which provides visitors maps to the stars' graves. Hollywood Forever Cemetery is where you will find the graves of early Hollywood greats and the headstone of Mel Blanc, "The Man of 1000 Voices," including Bugs Bunny and Porky Pig. Blanc's epitaph reads: "That's all, folks!" The Beatles' George Harrison was secretly cremated there.
LANDMARKS AND TOURIST ATTRACTIONS
All of the must-see landmarks: the Hollywood Sign, Mann's Chinese Theater, the Hollywood Walk of Fame, the La Brea Tar Pits, Rodeo Drive, Griffith Park, and Farmers Market, are included in the book. And, of course, there are a number of museums you can visit, including the Academy of Motion Picture Arts and Sciences' museum (opening in 2020), the George Lucas Museum, and the Museum of Television & Radio.
SOME UNEXPECTED SITES 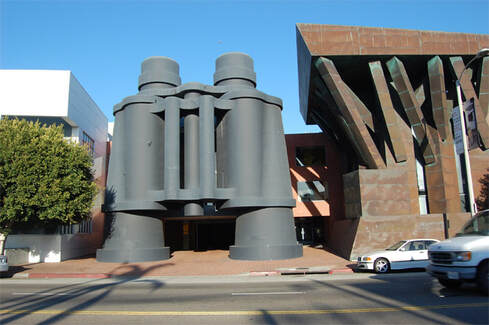 Google Headquarters at Santa Monic's "Binoculars Building"
The book also includes a number of surprises, including three castles in the Hollywood Hills (one formerly owned by Madonna).

There are architectural jewels; including the El Capitan Theater in Hollywood and the so-called "Flying Saucer" house that was the highlight of the 1984 film "Body Double."

There are sites that inspired songs and a tribute to the Apollo 11 astronauts on the Walk of Fame (not for being the first men on the moon. In typical Hollywood tradition, they were honored for giving us a great television performance!)

And then there is L.A.'s best kept secret: a secluded beach in Malibu where more celebrities own homes than anywhere else in the world.

It's the street where "Diagnosis Murder" was filmed and Robert Downey, Jr., mistook a neighbor's house as his own, walked into one of the children's rooms, and went to sleep. This prompting Jay Leno to joke: "Do you know what the hottest new business on Hollywood Boulevard is? Selling Robert Downey, Jr., a map to his own home!"

Want to see the North Hollywood home that Amelia Earhart lived in before she mysteriously disappeared? It's in the book. So are several political sites: every house that Ronald Reagan lived in Los Angeles (including his Pacific Palisades home when he was elected president and his Bel-Air retirement home), and Meaghan Markle's childhood home

There are also several sites associated with Richard Nixon's and Ronald Reagan's years in Los Angeles and John F. Kennedy's nomination as the Democratic presidential candidate in 1960.